(Extracts from his new book: The Great Turning  – From Empire to Earth Community)
Korten is also one of the founders of Yes! A Journal of Positive Futures http://www.yesmagazine.org/

Dr. David C. Korten left a career in academia, the foundation world, and government to raise public consciousness of the political and institutional consequences of economic globalization and the expansion of corporate power. He is probably best known as the author of the book When Corporations Rule the World. His most recent book is The Great Turning: From Empire to Earth Community, which places corporate globalization within the context of 5,000 years of “Empire,” used as a generic term for organizing human relationships by dominator hierarchy. Korten argues that the human system has now reached the limits of domination that social and environmental systems will tolerate. To secure its future, the human species must turn away from the dominator way of Empire to the partnership way of Earth Community.

“If Earth Community is to prevail, progressives must learn to win in the arena of
cultural politics. Win that struggle, and electoral and legislative victories will follow
naturally.”

Foundations of a Unifying Political Consensus
It is instructive to look at what Americans are telling national pollsters about their
concerns and values, as it suggests that a desire to strengthen the human connections of
family and community and to secure a positive future for our children may be the most
politically potent issue of our time.

Strong Families and Communities
Eighty-three percent of Americans believe that we need to rebuild our neighborhoods and
small communities and fear that family life is declining. Ninety-three percent agree that
we are too focused on working and making money and not focused enough on family and
community.

Healthy Environment
Nearly nine out of ten U.S. adults (87 percent) believe we need to treat the planet as a living system and that we should have more respect and reverence for nature. Nearly three out of four (74 percent) are concerned that pollution may destroy farmlands, forests, and seas.

International Cooperation
Seventy-six percent of Americans reject the idea that the United States should play the
role of world police officer, and 80 percent feel it is playing that role more than it should
be. More than two out of three (71 percent) believe that our dependence on oil leads to conflicts and wars with other countries and believe it is better to deal with our dependence on oil by conserving energy (83 percent).

Assault on Family Viability
Intended or not, these conditions are all a direct result of the neoliberal economic policies
that are the real priority of the corporate plutocracy. They leave families with few or no
good options, and they lead to mental stress, family breakdown, divorce, the destruction
of community life, and a coarsening of moral values.
High unemployment undermines family formation, and punitive welfare policies
force single mothers into jobs paying less than a living wage without affordable,
regulated, high-quality childcare options.
Corporations spend billions on direct marketing to children to create lifetime
addictions to junk food, alcohol, and cigarettes, and a childhood obesity epidemic is
poised to become the leading cause of premature death.
Declining healthcare coverage and skyrocketing healthcare costs place essential
health care beyond the reach of most families.
A deteriorating public education system is unable to deal with the special needs of
children physically and mentally handicapped by the consequences of growing up
in physically and socially toxic environments, let alone deal with normal individual
differences in learning styles and talents.
Lax environmental regulations allow corporations to discharge into the air, soil, and
water massive quantities of tens of thousands of toxins destructive of children’s
physical, neurological, and endocrinological development.

A Conservative-Liberal Alliance
There is a culture war in America, but it is not between liberals and conservatives. It is between the culture of Empire and the culture of Earth Community. Call those of us on the side of Earth Community progressives—progressive conservatives and progressive liberals. Although we have our differences, we share a commitment to creating a society governed by ordinary people and dedicated to the ideals of liberty, justice, and opportunity for all. Progressives of all stripes act from deeply shared values that resonate with the most basic of Christian values—do not kill, do not steal, love thy neighbor as thyself, and do unto others as you would have them do unto you. Yet just as these are not exclusively liberal or conservative values, neither are they exclusively Christian values. They are universal human values shared by believers in Christianity, Islam, Judaism, Hinduism, Buddhism, and Native spirituality, among others. 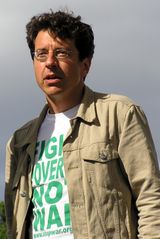 Monbiot’s book, The Age of Consent: A Manifesto for a New World Order, was published in 2003.

The book is an attempt to set out a positive manifesto for change for the global justice movement. Monbiot critiques anarchism and Marxism, arguing that any possible solution to the world’s inequalities must be rooted in a democratic system.

The four main changes to global governance which Monbiot argues for are:
A democratically elected world parliament which would pass resolutions on international issues;
A democratised United Nations General Assembly to replace the unelected UN Security Council;
An International Clearing Union which would automatically discharge trade deficits and prevent the accumulation of debt; and
A Fair Trade Organisation which would regulate world trade in a way that protects the economies of poorer countries.

The book also discusses ways in which these ideas may practically be achieved. Monbiot treads the path of a revolutionary, urging those who suffer the consequences of a global inequality predicated on developing world debt and subservience to utilise this debt and effectively hold the developed world to ransom. He posits that the United States and Western European states are heavily dependent on the existence of this debt, and that when faced with a choice between releasing the developing world from debt and the collapse of the global economy, their internal economic interests will dictate that they opt for the “soft landing” option.

Monbiot’s most recent book, Heat: How to Stop the Planet Burning, published in 2006, focuses on the issue of climate change. In this book, Monbiot argues that a 90% reduction in carbon emissions is necessary in developed countries in order to prevent disastrous changes to the climate. He then sets out to demonstrate how such a reduction could be achieved within the United Kingdom, without a significant fall in living standards, through changes in housing, power supply and transport. Monbiot concludes that such changes are possible but they would require considerable political will.

In his most recent book, Promise Ahead: A Vision of Hope and Action for Humanity’s Future (2000), Elgin chronicles how momentous “adversity trends” (such as climate change) are meeting equally momentous “opportunity trends” (such as the global communications revolution). He believes that within two decades, these converging forces will create a global, whole-system crisis where the human family will have the choice of either pulling together to create an evolutionary bounce, or pulling apart to precipitate an evolutionary crash.